The Tale of Two Ships Project has enabled me to research the history of La Concorde and Queen Anne’s Revenge, and grasp a more profound understanding of this one ship with very different identities. Although my knowledge of the ship has expanded over the course of my internship, there was still one question lingering in the back of mind: “Who was aboard La Concorde?”  Coming into the internship, I had no prior knowledge of La Concorde or Queen Anne’s Revenge. Therefore, discovering who was on the ship before it was captured by Blackbeard, acquiring more information about the enslaved individuals on board, and lastly understanding what happened to everyone after its capture was all information that sparked my interest. 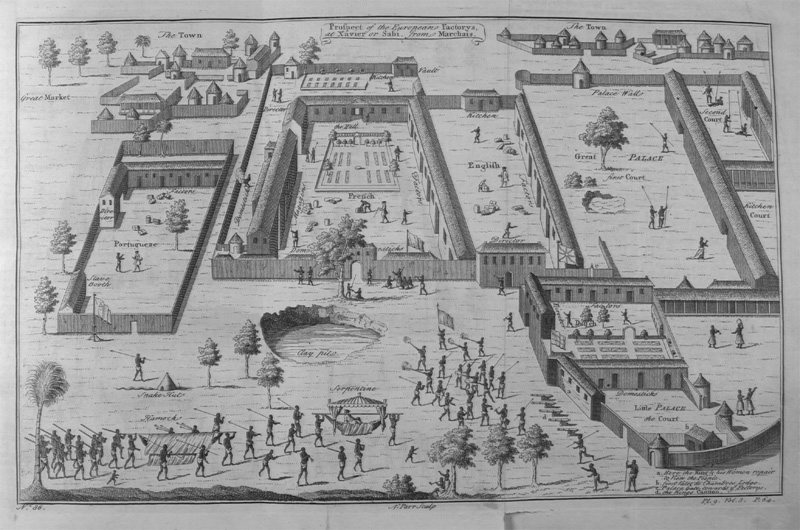 On July 8, 1717* La Concorde reached Juda and took 516 African captives onboard. The ship departed from Juda in October 1717* for the French colony of Martinique where slaves were sold, often to work on sugar plantations. On the crossing from Juda to Martinique sixty-one slaves died, leaving 455 slaves on board at the time of the ship’s capture by Blackbeard in November 1717.* Reports by Pierre Dosset, the Captain, and Francoise Ernaud, the first lieutenant on La Concorde’s final voyage, reveal that of these, sixty-one were sold in Grenada for 12,200 livres, and the remaining slaves were sold in Martinique. Unfortunately, there is very limited information pertaining to the slaves. Understanding where they were taken and how much they were sold for, however, is a major part of La Concorde’s story and provides a foundation for further research on the topic.

Despite scarce information about the slaves onboard, a muster roll from this final voyage sheds light on facts about the ship’s crew. The muster roll lists 75 crew members by name with roles varying from the captain, surgeons, pilots, carpenters, cabin boys, gunsmiths, and even a trumpeter. It also details how much each crew member was paid per month with Captain Pierre Dosset making 100 livres (French currency) per month in contrast to the average seaman earning about 20 livres a month. In addition to listing the crew’s pay rate, there is a miscellaneous data column on the muster roll that explains what happened to the crew upon the ship's capture by Blackbeard. It states whether a crew member was taken with the pirates voluntarily or involuntarily, all fatalities that occurred during the voyage with the date included, and whether each crew member returned to Nantes, France after the ship was captured. In Joseph Alabard’s case, the information listed in the miscellaneous column identified his race and country of origin, stating that he was “a negro from Juda and returned to Nantes.” Seeing this information on the muster roll confirms that there was at least one black member of the crew on La Concorde’s last voyage.

Reports from Captain Dosset and First Lieutenant Ernaud also indicate that there may have been another black crew member on this voyage serving as a trumpeter. The thought of having black crew members working on a slave trading vessel was very shocking at first glance. Despite this practice appearing uncommon to me, excerpts from W. Jeffery Bolster’s Black Jacks, confirms that black seamen did exist in the 18th century, despite facing adversity, which was truly fascinating.

Another fact I discovered is that branding was a common practice during the early 18th-century French slave trade. Once La Concorde reached Juda, the African captives taken aboard the ship were most likely branded, but documents do not specifically state that slaves were branded on the 1717 voyage. A report from Dosset, however, confirms the practice of branding during the time period: he reclaimed fifteen slaves in Martinique by recognizing the ship’s mark (brand) on the slaves. During the 18th-century slave trade, branding was practiced by capturing Africans and carrying them onto ships to be examined closely by the ship’s surgeon and given a brand specific to that ship. For instance, a slave who was to be carried from Juda to Martinique on La Concorde would have had an “LC” brand on their chest indicating that they were on La Concorde, helping slave owners quickly identify their respective slaves.

Understanding who was on the ship, the various practices that occurred during the early 18th-century slave trade, and what happened to certain individuals once it was captured puts the narrative of La Concorde and Queen Anne’s Revenge into historical context, making the ship’s narrative more personal. Rather than viewing the crew as just a group of ordinary seamen, I am now aware of their names, role/title aboard the ship, pay rate, and their fate upon the ship’s capture, which is all valuable information and will hopefully assist with further research. Learning about the practice of branding in the 18th century was also very informative. Prior to reading excerpts from Dosset’s report, I believed that branding occurred once slaves reached their respective plantation. However, discovering that this belief was inaccurate was very enlightening and offered me a new wealth of information pertaining to the practice. Overall, diving deeper into the literature to answer, “Who was aboard La Concorde?” has enhanced my understanding of the ship and the individuals on its last voyage.

*The original French documents state the dates as July 8, October 9, and November 28 respectively, which differs by 11 days from the English calendar of today. Modern sources vary in their usage of these calendar dates.