Queen Anne’s Revenge was the flagship of Edward Teach, also known as “Blackbeard,” during the period known as the “Golden Age of Piracy.” Prior to its capture by the famous pirate and his men, the ship was called La Concorde, a French merchant vessel engaged in the slave trade. 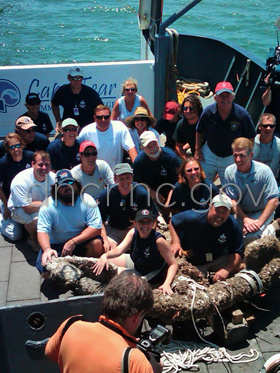 An Unexpected and Treasured Find

The site is recognized as a national treasure and is one of the oldest shipwrecks discovered in North Carolina. The remains lay relatively undisturbed since the vessel ran aground in 1718.

The shipwreck was located in 1996 by Intersal, Inc. of Florida, by Operations Director Mike Daniel through research provided by Intersal President Phil Masters and is administered by the State of North Carolina.

In 1997, under the direction of the Underwater Archaeology Branch of the North Carolina Department of Cultural Resources, archaeologists began exploring, documenting, and recovering archaeological remains at the Queen Anne's Revenge/La Concorde shipwreck site off the coast of Beaufort.

Follow our discovery and conservation efforts by reading our blog and checking out artifacts we have identified. You can follow our team's efforts as they bring these historical treasures ashore.

A Mission of Many Worthy Aims

The project helps historians paint a better picture of the Colonial period in North Carolina by shedding light on the wider political and economic systems of the time. It also plays a key role in educating the next generation of archaeologists, as well as boosting tourism in the Crystal Coast region.

Our project is a collaborative effort that brings together a diverse group of scholars and technological experts.

We could not share the historically significant treasures from this wreck without the help of our generous sponsors.

Meet our full-time staff of archaeologists, conservators, and researchers dedicated to sharing this project with the world.