When we left off last month, we shared the mysterious story of the QAR breech blocks. This month, the story continues… 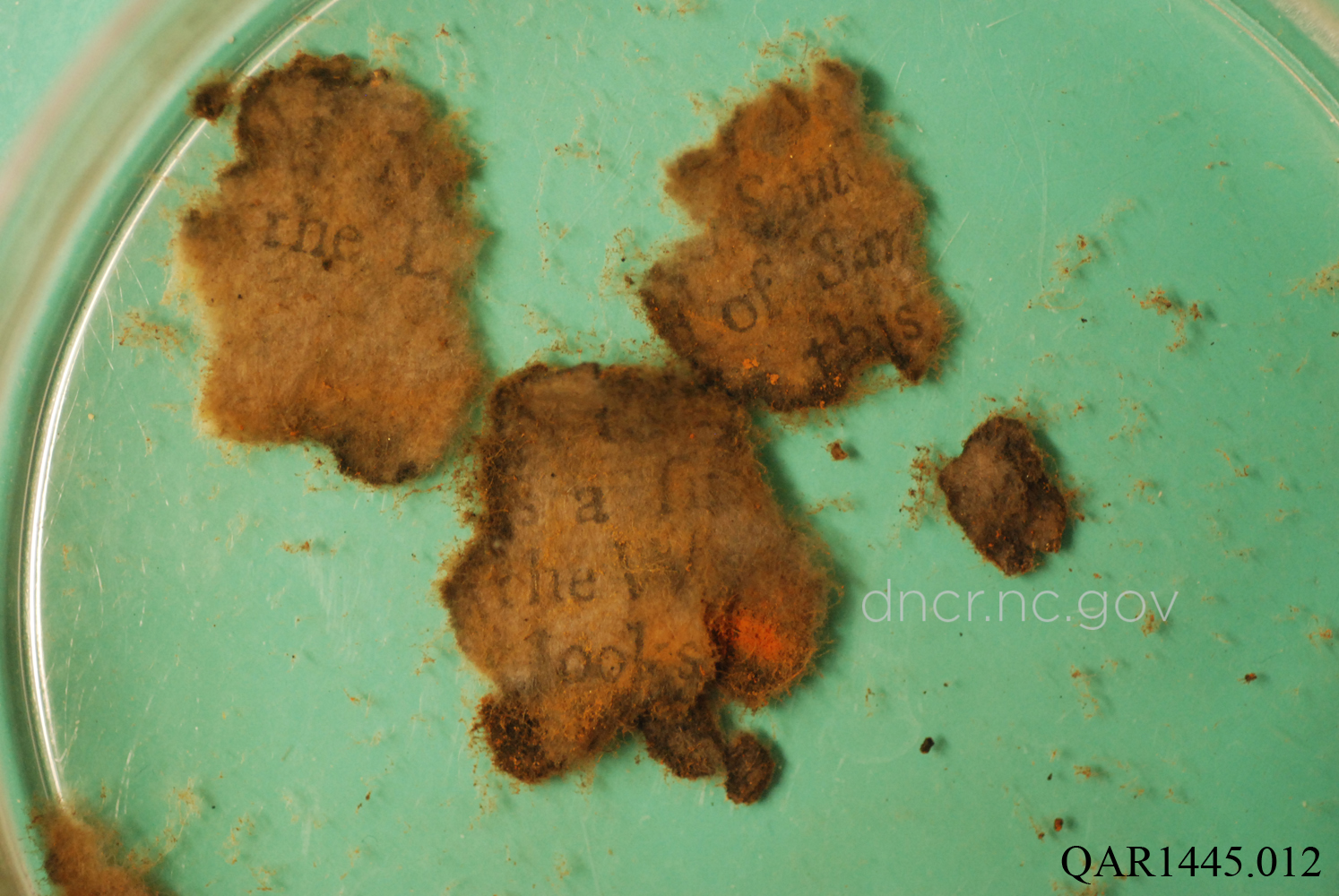 It was discovered upon cleaning one of the breech blocks that the wooden plug called a tampion was still lodged in the neck. The tampion was carefully removed only to reveal a mass of textile behind it, seemingly acting as a gasket to further seal the chamber after it was loaded with gunpowder. As we routinely do in a process called desalination, the textile was placed in successive baths of water to rid it of salt, gunpowder, and iron residues. While changing its bath one day, an unexpected discovery took us by surprise. Slowly unfolding in the murky water were fragments of a different material. Close inspection under a microscope revealed that this new material was in fact paper with text printed on it. 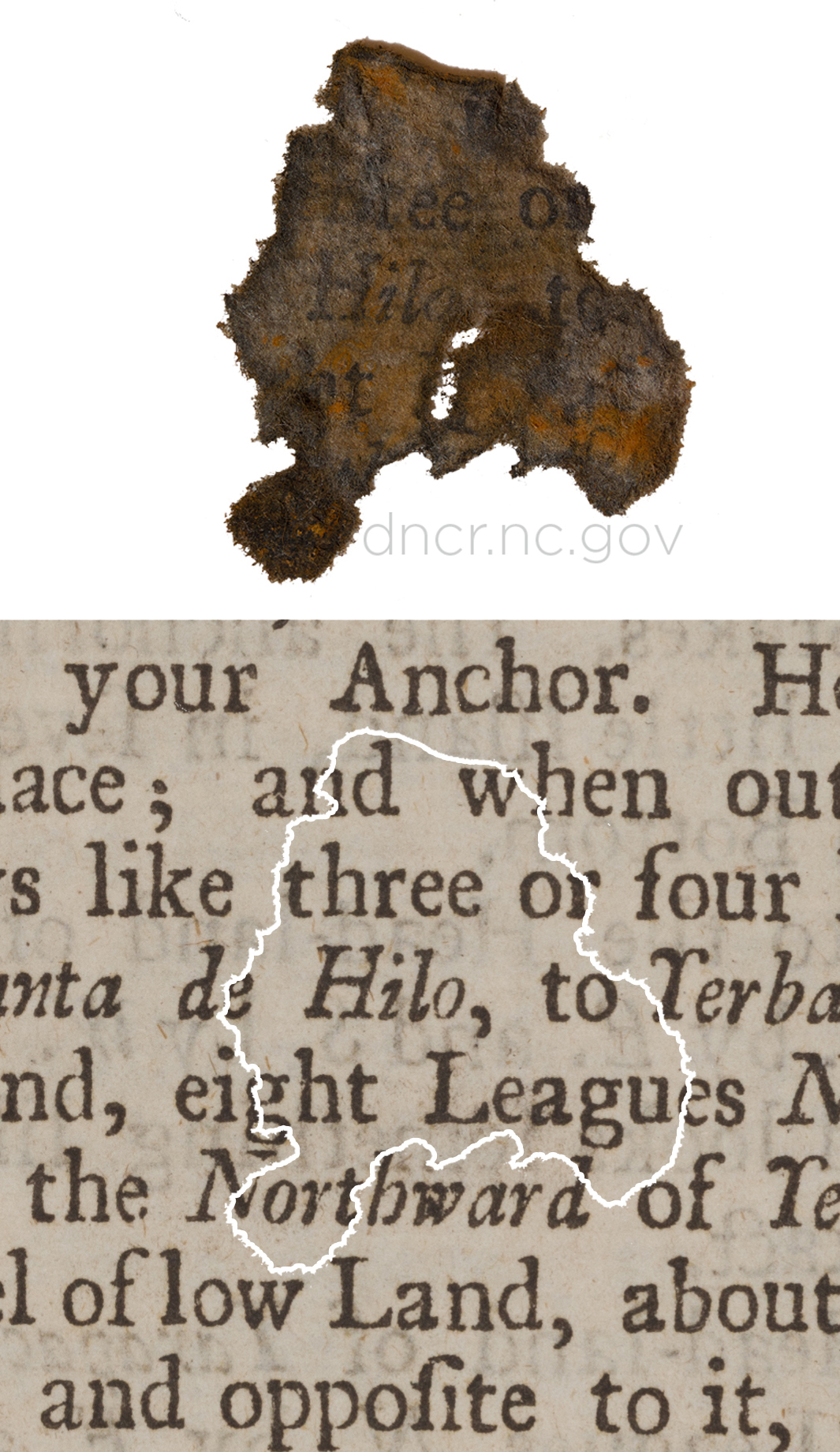 We then learned that the paper was actually made of several sheets, only about the size of a quarter, stuck together. We carefully separated the pages and began transcribing the letters and words which no one had read for nearly 300 years! Study revealed some very telling words, such as “South” and “fathom,” both of which led us to believe we were looking at a nautical treatise. Treatises and voyage narratives often told of uncharted waters and provided detailed maps and observations to future travelers in these relatively unknown waters. These narratives were produced in abundance beginning in the late 16th century, as global exploration came to be seen as a noteworthy cause.

One word, however, really stood out among the rest: “Hilo.” Since it was capitalized and italicized, we thought it might refer to a location. This idea set us on the path to discovering Ilo, Peru. As it turns out, beginning in 1680, many voyage narratives were published about South America, and Ilo, Peru occurs in several of them with a variety of spellings (Ylo, Heloe, Ely, and Hilo). It took finding the correct spelling and aligning nearby letters to identify the source. 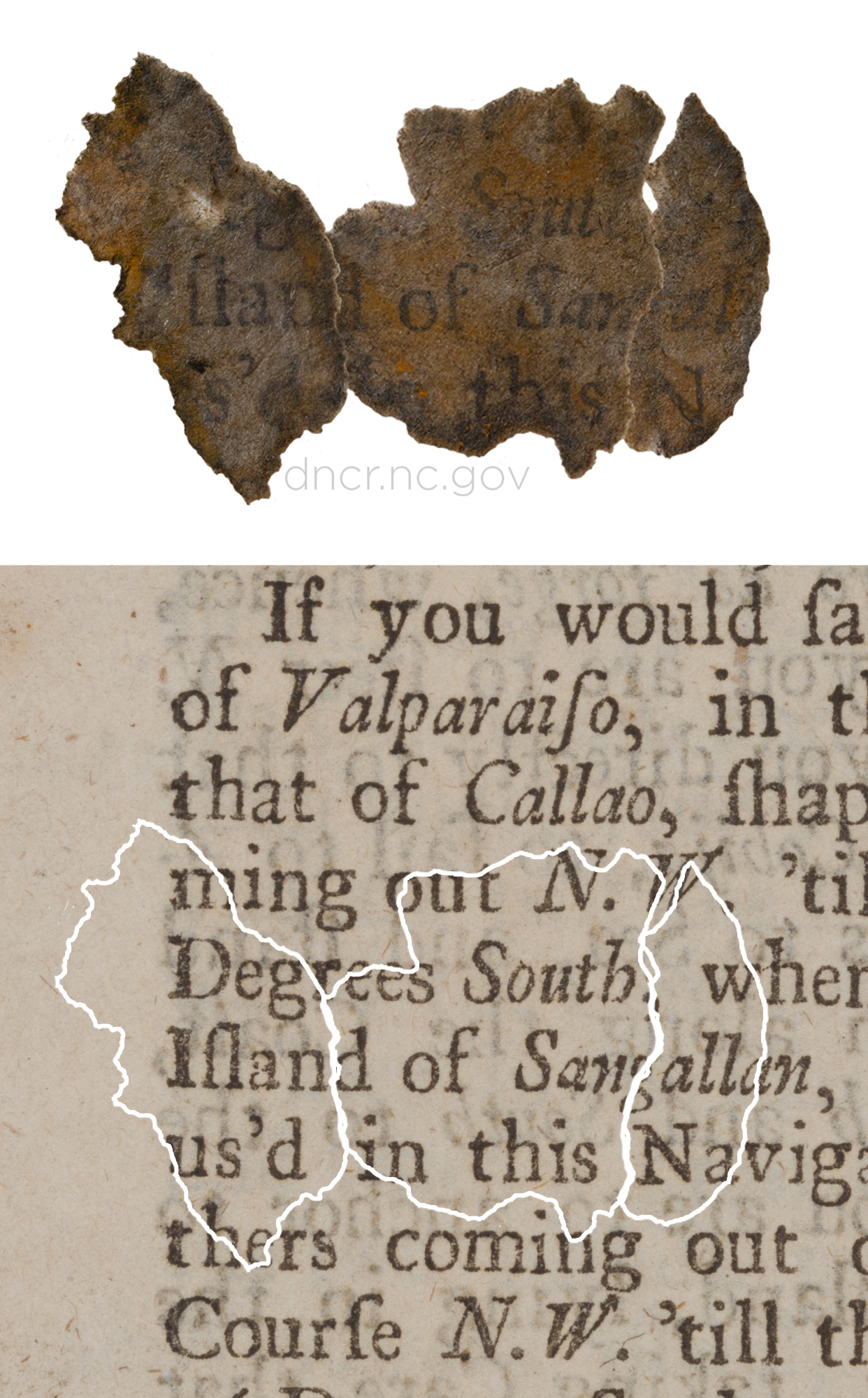 In 1708, Woodes Rogers departed Bristol, England with two ships to explore the possibility of English trade interests in the far-flung seas. Upon his return, he published his journal, which was extremely well-received by the English public. Although our paper fragments did not match Rogers’s book, the Hilo fragment was discovered to be an exact match for page 178 of the first edition of Edward Cooke’s “Voyage to the South Sea and Round the World.”

Other than serving as one of four captains on Rogers’s journey, not much is known about Edward Cooke, perhaps because the remarkable life of Woodes Rogers overshadowed his fellow captains. Rogers went on later to become the first Royal Governor of the Bahamas, sent there in the summer of 1718 with the mission to stamp out piracy. Historians have long since speculated on the connection between Blackbeard and Rogers. Unfortunately, we cannot substantiate a link between the two men, even with this intriguing evidence: it could have merely been scrap paper used in the heat of the moment.