Blackbeard had now left the scene of the disaster at Beaufort Inlet, along with the wreckage of his once proud flagship Queen Anne’s Revenge. Toward the end of June, he and a select crew headed for the town of Bath aboard the remaining Spanish sloop, now armed with eight guns and renamed Adventure. He had left the majority of his crew marooned, and had stripped Bonnet’s ship Revenge of its sails, preventing a hasty pursuit once Bonnet himself returned from Bath to see the betrayal which had transpired. 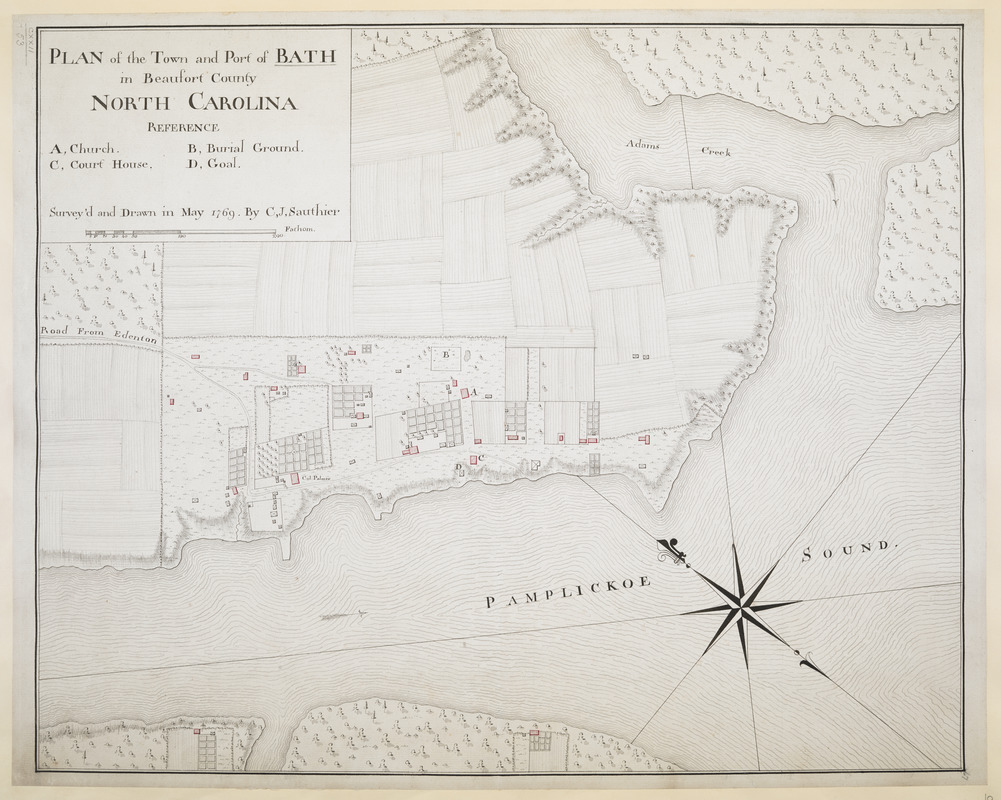 Bath was North Carolina’s oldest town, incorporated in 1705, and the governmental center of the colony. Here Blackbeard planned on securing the pardon offered under the Act of Grace. This was the last of the mainland colonies to provide support for pirates, and became their new home base. The governor, Charles Eden, may have expected the arrival of Blackbeard, having just granted a pardon to Bonnet some time before. Eden knew that compliance with the pirate not only meant that his town would not be attacked, but that a degree of economic gain may also be in the cards. And so, when Blackbeard arrived with a questionable ship laden with goods after his departure from Beaufort, Eden had no choice but to comply with the pirate’s orders. Blackbeard’s past crimes were, for all intents and purposes, forgiven.

Charles Johnson paints a different image of the relationship between Bath and Blackbeard. He claims that Governor Eden had no economic relationship with the pirate, but was in fact an honorable man forced into awarding the pardon and doing business with him under threat of destruction to the town. Johnson states that “Mr. Eden always behaved… and bore the character of a good governor, and an honest man. But his misfortune was the weakness of the colony he commanded…” Even so, it is evident that Eden accepted more than enough of Blackbeard’s ill begotten gains to remain wholly innocent.

Blackbeard never settled down, despite his efforts to make his appearance seem as such. He would divide his time between stays in Bath with his newly betrothed (his 14th wife, according to Johnson) and his camp out at Ocracoke, where his crew also stayed. While in Bath, he spent his time in unchecked revelry due to gifts of valuable goods to the local planters. It is from his camp where he staged all manner of robberies and crimes, ranging from robbing rowboats to making prizes of several English ships and two French-owned ships, which, upon returning to Bath, were passed off as salvage of derelict vessels. The cargo was then sold off, through which Governor Eden himself received sixty hogsheads of sugar.

With accounts of crimes in the region multiplying, it was not long before the planters in the region realized Eden was powerless to stop the pirate and enough was enough. They secretly sent representatives to Alexander Spotswood, the governor of Virginia and a hardened opponent to piracy. Spotswood relished the thought of eliminating Blackbeard, and wasted no time assembling his forces, marking the beginning of the end for one of the most wicked pirates in the Atlantic.

Image:
-"Plan of the Town and Port of Bath in Beaufort County North Carolina" by C.J. Sauthier, 1769. Map reproduction courtesy of the Norman B. Leventhal Map Center at the Boston Public Library. (CC BY-NC-SA 4.0)