On This Day, the Fate of a Ship was Sealed

On or around June 10, 1718, Blackbeard lost his Queen Anne’s Revenge at Topsail Inlet, present-day Beaufort, NC. 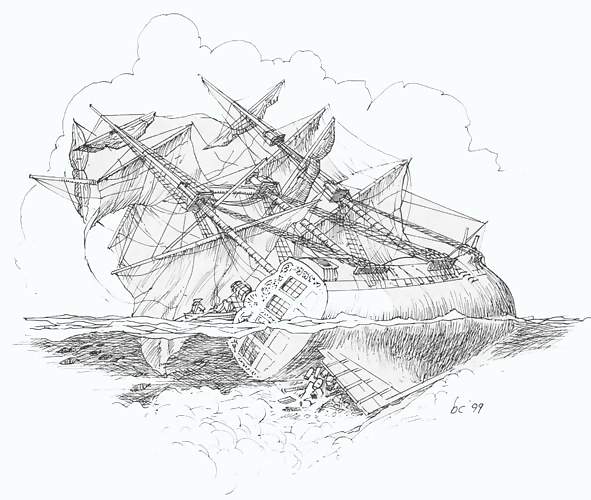 The intent or lack thereof is unclear. Varying stories from historical documents tell us it could have been purposeful or accidental. One letter from Captain Ellis Brand of the HMS Lyme on July 12, 1718 says the pirates “endeavour’d To goe in to a harbor, call’d Topsail Inlett,” so perhaps they were just trying to enter port. However, an article on July 14, 1718 from the Boston Newsletter suggests Blackbeard intended to take the King’s Pardon “and on that purpose they Run their Ship ashore at Topsail inlet.” The most interesting story comes from the deposition of David Herriot, whose ship Adventure was captured by Blackbeard’s fleet in early April in the Bay of Honduras, and Herriot was detained with his ship. According to Herriot, it was common knowledge that Blackbeard ran his ship aground on purpose, “to break up the Companies, and to secure what Moneys and Effects he had got for himself.”

Herriot’s version of the story explains that the four ships of Blackbeard’s fleet (including Bonnet’s Revenge and a sloop they’d captured in the Caribbean) were trying to enter the inlet. During this event, Queen Anne’s Revenge became stuck on a sandbar, and Adventure, now under command of Blackbeard’s quarter master Israel Hands, was sent to assist but also became stuck. Herriot asked for compensation for the loss of his ship and was promised it, but instead Blackbeard marooned him and about 15 others on a nearby shoal. Blackbeard then selected the most fit of his men and left Topsail Inlet with the small Spanish sloop.

What happens next isn’t thoroughly documented, but we know that Blackbeard went to Bath to accept the King’s Pardon and probably spent some time living there. Of course, we all know this wasn’t the last we will hear of him…

Image:
-Illustration of the loss of Queen Anne's Revenge. Image by NC Department of Natural and Cultural Resources.