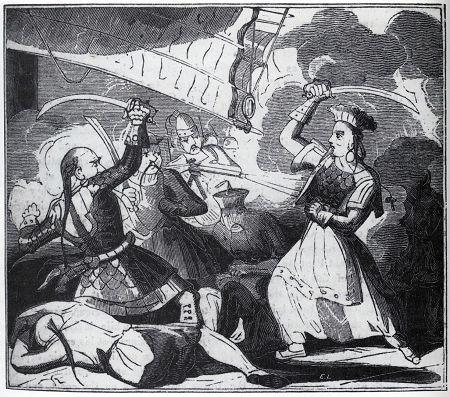 When studying maritime history, the presence and impact of women is seemingly less well-documented than that of men. When looking at piracy specifically, the absence of women is even more stark by comparison to the tales of the famous male pirates. There are few household names for female pirates: Anne Bonny and Mary Read. These women were made famous by the same 18th-century book, A General History of the Pyrates, that featured Blackbeard along with many other male pirates. Bonny and Read are just two examples of the female pirates that have existed. One of the most notorious and powerful female pirates in history was Cheng I Sao.

Cheng I Sao was known by many names including Shih Yang, Ching Shih, Mistress Ching, or Zheng Yi Sao. Born in 1775 under the maiden name Shih Yang, Cheng I Sao was a Cantonese commoner who rose to and maintained power in the male-centered culture of South China. Shih Yang left her unsavory past to become the wife of a prominent local pirate, Cheng I in 1801. This marriage resulted in her name changing to Cheng I Sao, or Cheng I’s Wife. The couple worked well together and quickly succeeded in establishing a significant fleet of loyal pirates and creating a pirate confederacy. This included 400 local ships called junks and 70,000 men by 1804. They split the fleet up into six different squadrons sailing under different colored flags and commanded by generals loyal to the Chengs.

In 1807, Cheng I died unexpectedly, leaving Cheng I Sao widowed. Rather than surrendering her authority and leaving piracy, Cheng I Sao strived to maintain the power over the pirate confederacy that she and her husband had cultivated over the years. Knowing that maintaining this authority would be difficult, Cheng I Sao immediately sought the support of her husband’s most influential family members. This support would legitimize her rule and tampered any potential resistance and uprisings. She was able to maintain the allegiance of five squadrons and personally led the sixth and most powerful squadron (the Red Flag) herself, with the aid of her late husband’s protégé. At that time, the Red Flag Squadron alone had 300 junks and between 20,000-40,000 men.

After establishing many personal relationships and loyalties, Cheng I Sao also created a system of codes that the pirates under her command must follow. The code was very strict, and the enforcement was even described as incredibly swift and efficient. If a pirate was found blatantly breaking a code, such as stealing from the public funds or from the community supplying and supporting the fleet, it resulted in swift and immediate punishment, including death. Any pirate found giving an order or intentionally disobeying an order was decapitated immediately. Western captives reported to have seen pirates flogged, placed in irons, or quartered for breaking the code. If a pirate did not report to work and did not inform his superior of a need for leave, he would have an ear cut off for suspected abandonment of the fleet. The code was a brutal, but effective way of maintaining order and profits within the pirate fleet.

Cheng I Sao knew that maintaining all the vessels and pirates would require significant amounts of money, so she created reserves to use and even instituted taxes on all earned goods. Part of the earnings remained with the pirates who captured the goods, while a significant portion was put into the community fund to maintain the fleet. Local navies feared them because whether on land or water, Cheng I Sao’s pirates were ferocious, highly skilled, and generally successful in their takes.

Her reign of terror would not be eternal, however. After fighting the Chinese Navy and western traders, Cheng I Sao accepted a pardon for her and her pirates and retired in April of 1810. Cheng I Sao lived a long life, staying involved in politics and dying in 1844 at 69 years old. Her reputation lives on through fictional representations of her life such as the character Mistress Ching (one of the 9 Pirate Lords) in Disney’s Pirates of the Caribbean: At World’s End.