In about 1698, a young woman found herself in jail for stealing, pregnant with her married employer’s illegitimate child and no husband to support her. Despite these grim circumstances, Anne Bonny’s mother was soon released from jail, raising her daughter disguised as a boy and living as the lady of the house with her still married-to-another-woman former employer. The three of them eventually moved from Ireland to the Carolinas, where Anne’s father bought a plantation and started a business of his own. The girl, Anne Bonny, would go on to have her own great adventures, overcoming odds and stereotypes similar to her mother. 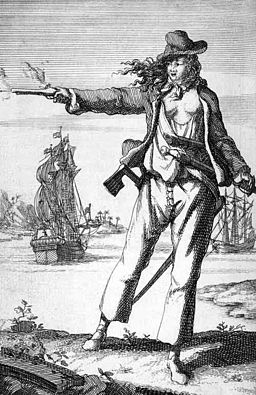 To her father’s consternation, Anne married a penniless sailor and sailed away to the Caribbean. Shortly after arriving, she met the pirate Jack Rackham, who would alter the course of her life forever. Rackham convinced her to elope with him, disguising herself in men’s clothing so that his crew would not be suspicious of having a woman on board. When she became pregnant with his child, he put her ashore in Cuba to be cared for by friends, rejoining him after giving birth. She remained faithfully by his side, fighting fearlessly on deck beside fellow female pirate Mary Read, until being captured and sentenced to prison for their crimes of piracy. In the end, it is not known what happened to Anne Bonny, only that she was not executed due to pregnancy.

When given her last chance to visit with her co-pirate and lover Jack Rackam, history tells us that Anne Bonny’s final words to him were, “She was sorry to see him there, but if he had fought like a man, he need not have been hang’d like a dog.” Anne’s life included adventure and excitement that started well before her pirating years with rebellion, love gone awry, and a large dose of scandal. Anne and her mother’s stories can be found in the book, “A General History of the Pyrates” by Captain Charles Johnson (sometimes listed as Daniel Defoe).