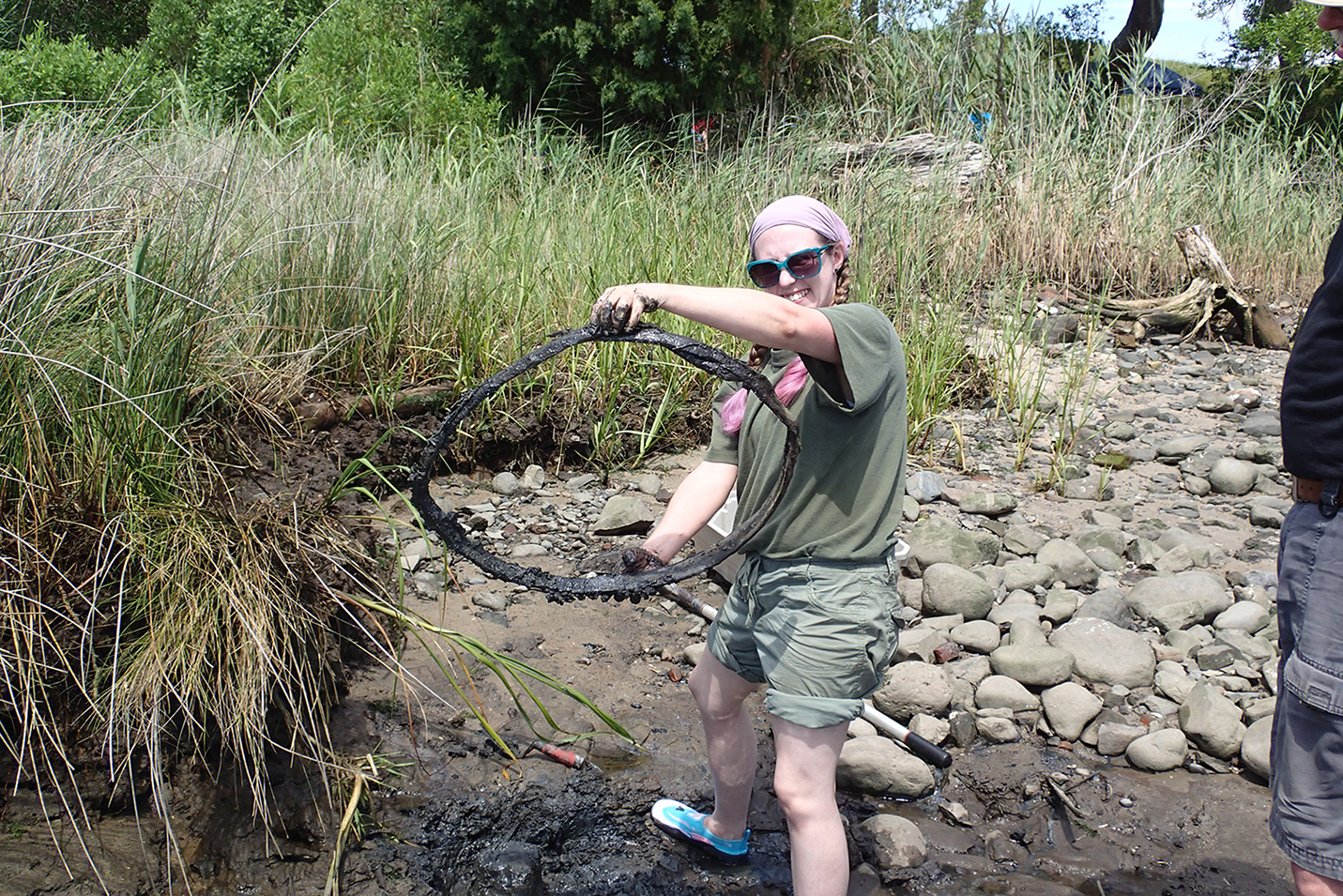 While the Queen Anne’s Revenge Conservation Lab is known for its treatment of artifacts recovered from Blackbeard’s infamous flagship, conservators sometimes work with objects from other North Carolina sites. Recently, the lab received an intact wooden cask hoop from ECU’s Department of Anthropology. This hoop was recovered from the waterfront at the British-colonial site of Brunswick Town in 2015 during the inaugural ECU Archaeology Field School, directed by Dr. Charles Ewen. Discovered in remarkably good condition on the muddy banks of the Cape Fear River, the wooden barrel band was waterlogged after centuries of rest in the river’s waters. It remained stored in water until treatment could begin. In order to stabilize the cask hoop, it was brought to the QAR Lab in Spring 2019 to undergo conservation treatment.

The waterfront where the cask hoop was found was once the site of a wharf in the burgeoning colonial settlement of Brunswick Town. Founded by Maurice Moore in 1726, the settlement was known for the processing of long-leaf pine tree sap and resin for naval stores (tar, pitch, and turpentine). Aside from these economic ventures, the town also became embroiled in several important historical events, with the most notable being the American Revolution. Following the war, Brunswick Town was largely abandoned as the political and economic importance of neighboring Wilmington grew. Today, it is a popular state historic site! 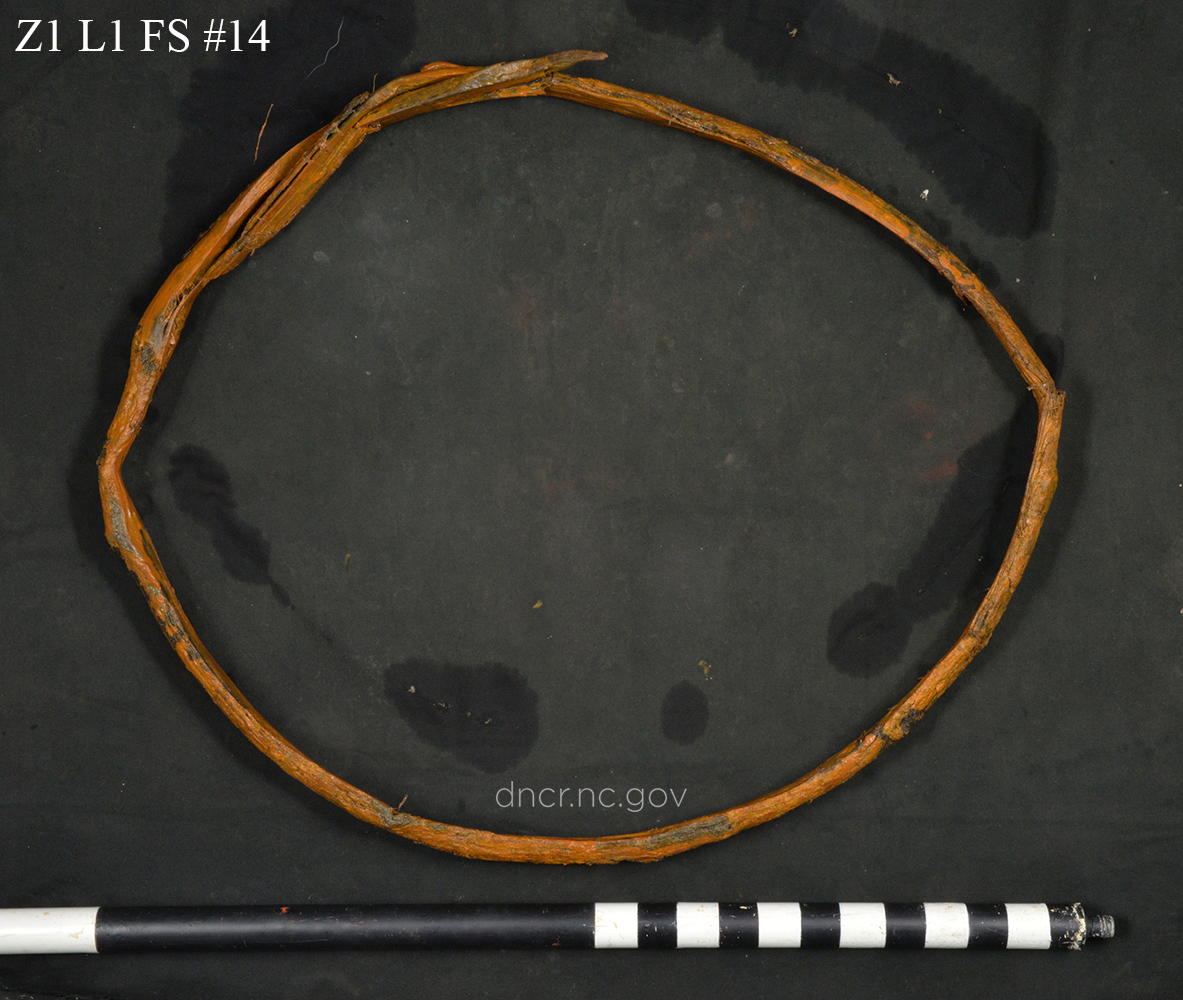 Although the cask hoop is just a small piece of this history, it has the capacity to yield even more information about the town and its residents. However, before any new information can be learned from the hoop, it must be protected from any potential future deterioration. After centuries of burial on the shoreline of the Cape Fear River, much of the wood’s original cellular structure has broken down. The cavities left in the wood after deterioration are filled with water. If left to dry without proper treatment, the water within the hoop will evaporate, leading to shrinkage and structural collapse.

In order to prevent this, PEG treatment is used. PEG, an acronym for Polyethylene Glycol, is a chemical compound that is used to strengthen the structure of waterlogged wooden objects. During the process, PEG is gradually added to a tank holding the artifact in low salinity, reverse osmosis water. Over time, the liquid PEG replaces the water in the object, strengthening or “bulking” the artifact’s structure. Progress is monitored on a weekly basis until more PEG can be added. Additions are done in 5% intervals to slowly introduce more PEG into the artifact. 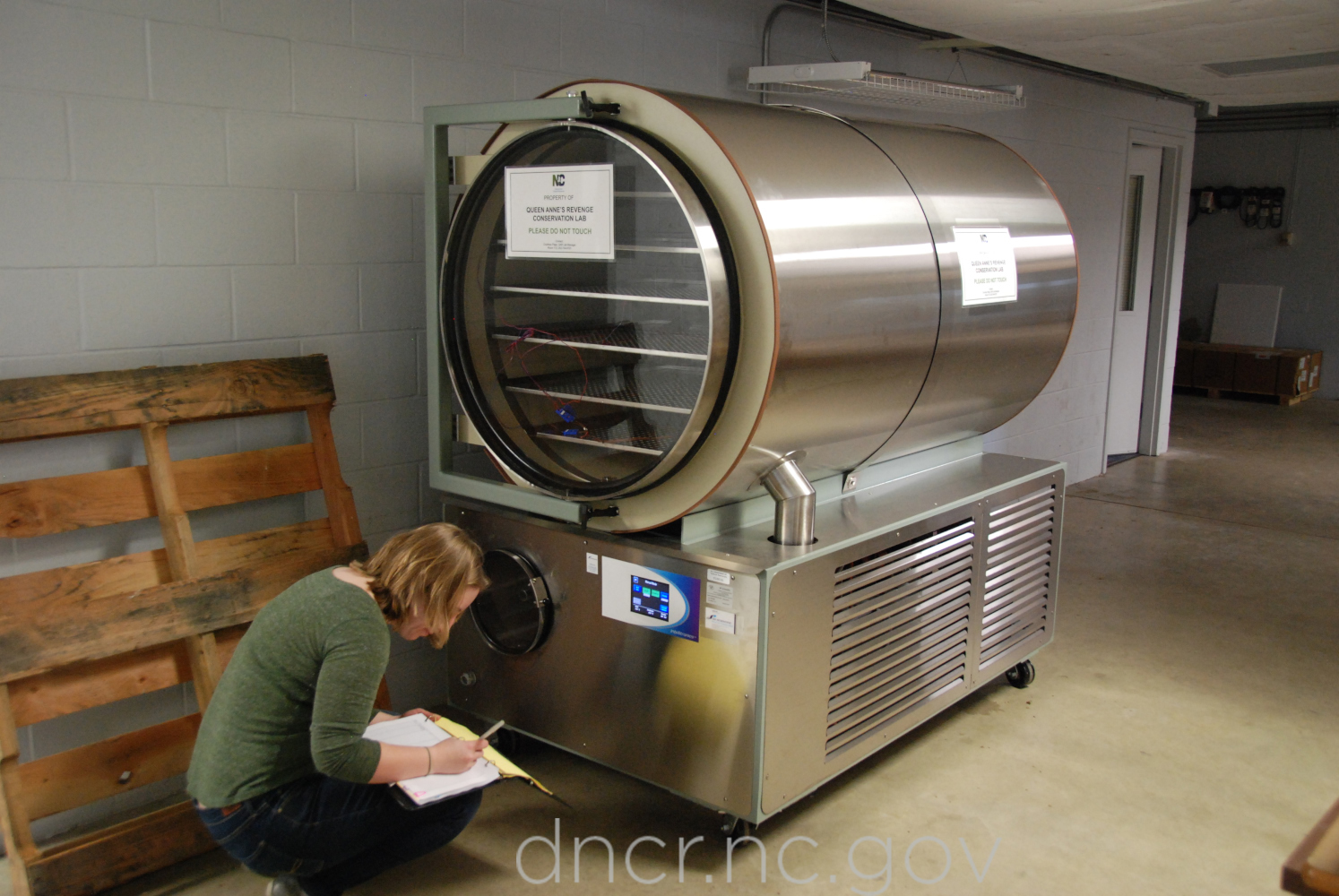 Once enough PEG has entered the artifact, it goes through the final stage of the process: freeze drying. At this point, the object is placed into a large, vacuum sealed freeze-dryer and kept at a temperature between -32 and -40°C. The remaining water in the wood freezes before transitioning into vapor. The amount of water removed during this process is determined by weighing the artifact after freeze-drying and comparing it to the weight before treatment. With the water finally removed and the PEG strengthening the remaining structure, the wooden artifact is finally ready to be stored in a climate-controlled environment.

While the Brunswick Town cask hoop is still a recent addition to the lab, it is well on its way to becoming stable through PEG treatment. Numerous other wooden artifacts from Queen Anne’s Revenge accompany the barrel hoop in this process.  If you would like to know more about the cask hoops recovered from Queen Anne’s Revenge and how casks were constructed, check out our previous Artifact of the Month!