Artifact of the Month: It Was a Woman's World Too 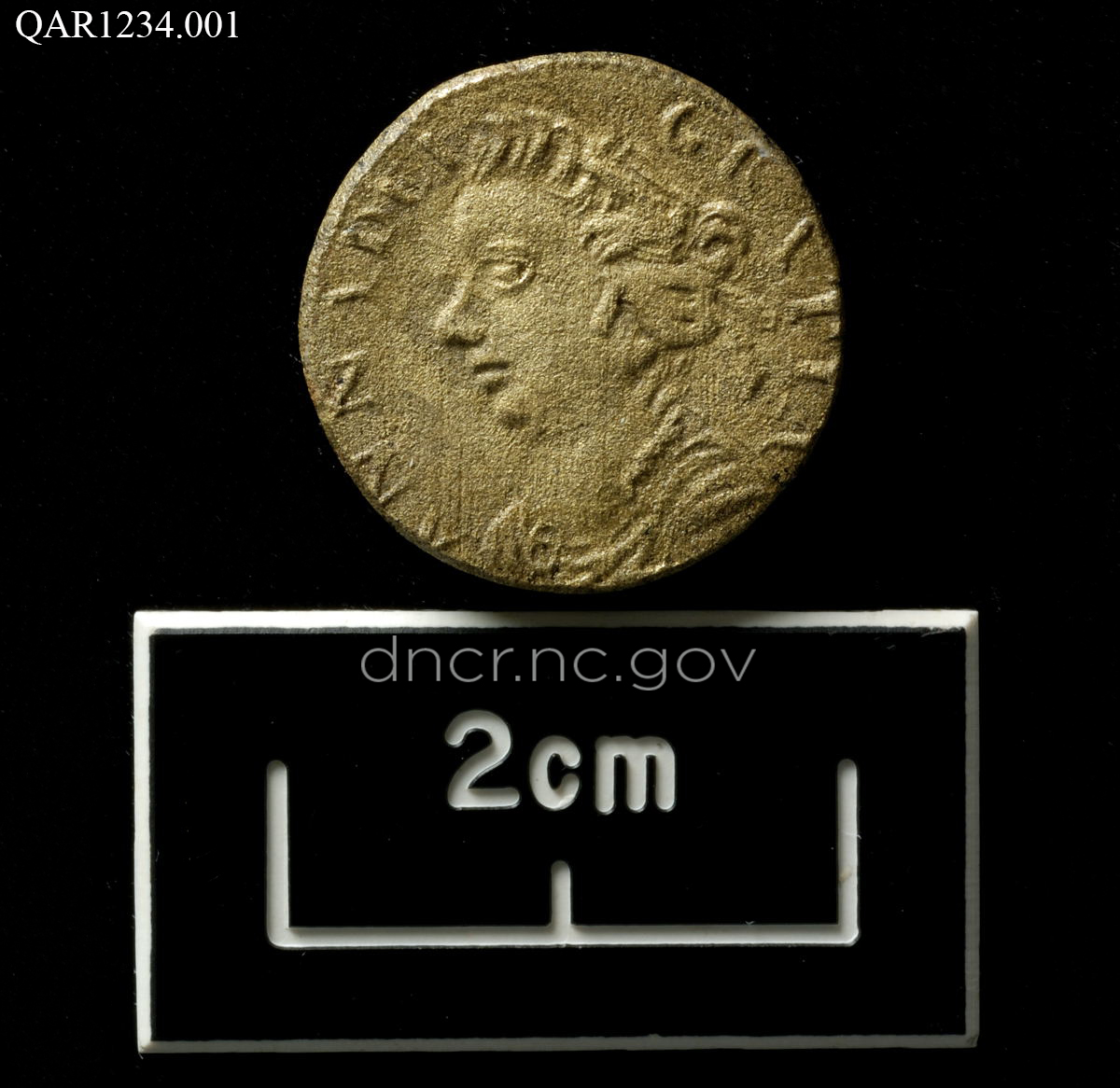 The histories, stories, and legends told about such notorious pirates as Blackbeard can give the impression that the Atlantic world in the early 18th century was solely a world of men. One small, unique artifact recovered from the stern area of the QAR site, however, reminds us that this was very much a woman’s world too. From the portrait and lettering, this object is identified as a coin-weight made during the reign of Queen Anne of England (reign 1702-1714) for checking the weight of English gold one guinea coins. Using XRF, the coin-weight was determined to be made of brass.

In England, monarchs authorized coin-weights to be made for checking weights of silver and gold coins, in case of loss of weight and value through wear or clipping. In the 18th century, box sets might include a balance, charts and various weights for checking gold and silver coins of different countries, often in use at the same time. Such sets were used by merchants, traders, and even perhaps pirates. The first gold guinea coins were made in 1663 by the Royal Mint in the Tower of London. Since they were originally produced with gold from Africa and for use in Africa, they were popularly referred to as guinea pieces. The monetary value of one guinea was initially 20 shillings (20s) but rose to 30s by 1696. By the Great Silver Recoinage of 1696-1699, it was 22s. In 1717 its price was fixed at 21s. It was eventually replaced in 1813 by a new coin: the sovereign, with the value of 20s. 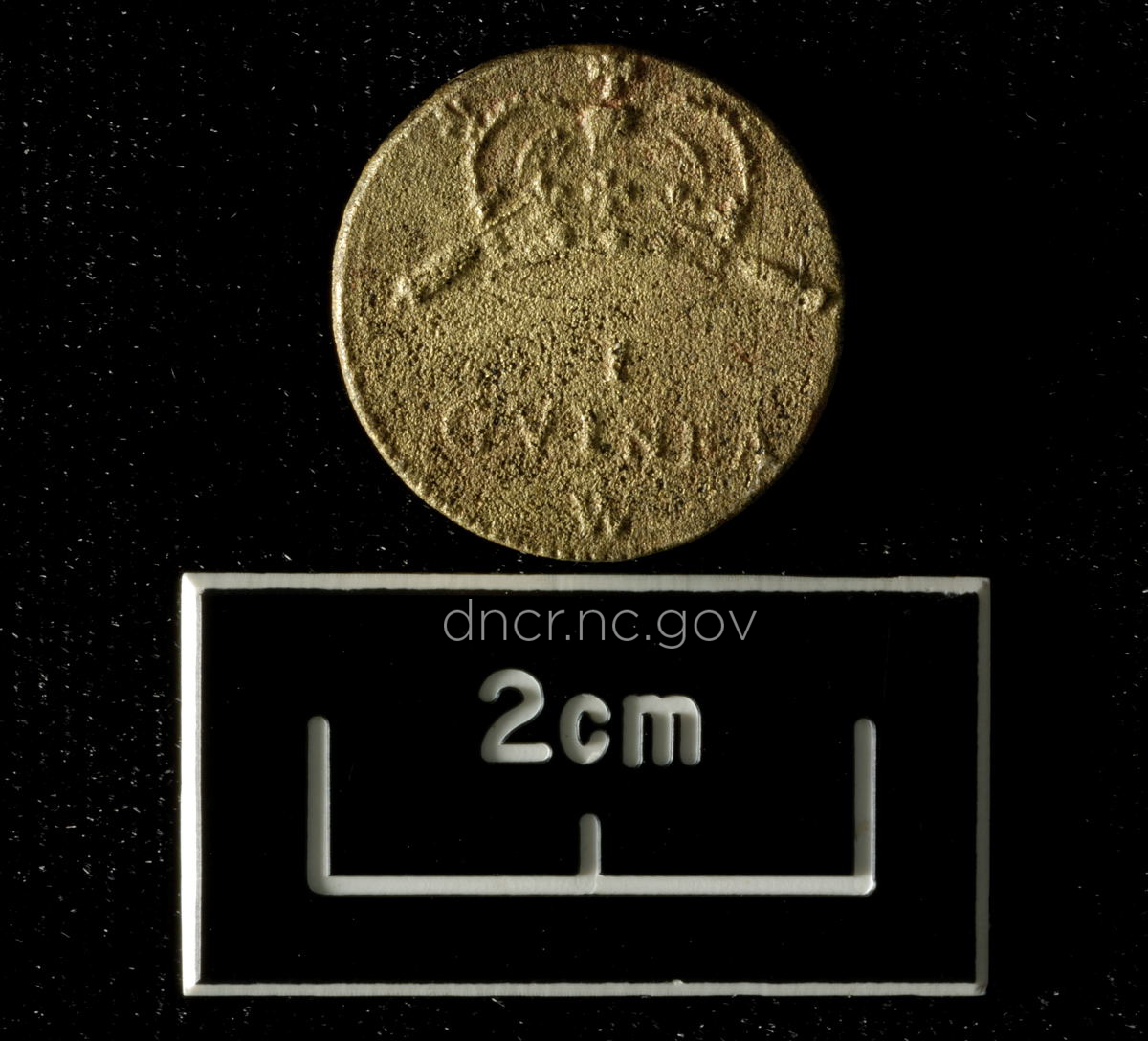 Numbers of guinea coin-weights surviving today vary, with fewer from reigns when gold coin was stable, with little if any variation in its weight. Coin-weights of Queen Anne are very rare, which makes the example from QAR especially intriguing. Its discovery and identification inevitably lead to more questions about its use and presence on the ship. The coin-weight is on permanent exhibit at the NC Maritime Museum, in Beaufort, NC.

This unique find, with the portrait and name of Queen Anne is a reminder that during the time the ship sailed, there were women across the Atlantic world who were also pirates, warriors, merchants, farmers, traders, healers, artists, poets, musicians, and rulers. As we continue investigations of this ship that was a privateer, a slave-trade vessel, and a pirate-ship, its hidden histories will continue to be revealed.

References:
-Lawrence, L.A. “Coin Weights,” British Numismatic Journal 6(14): 287-303, 1909.
-Newton, Isaac. “On the Value of Gold and Silver in European Currencies and the Consequences on World-Wide Gold- and Silver-Trade, (25 September 1717).” In “Masters of the Mint, 1572-1869.” Accessed January 2020,  http://www.pierre-marteau.com/editions/1701-25-mint-reports.html
-Ruding, Rogers. Annals of the Coinage of Great Britain and its Dependencies: From the Earliest Period of Authentic History to the Reign of Victoria, 1840. Accessed January 2020, https://archive.org/details/annalsofcoinageo01rudiuoft/page/62/mode/2up
-Withers, Paul, and Bente Romlund Withers. British Coin-Weights: A Corpus of Post-Conquest Coin-Weights Made in England, Scotland and Ireland for Use in Britain. London: Galata Print, 1994.