Lessons in Time from Conservation and Underwater Archaeology

Prior to coming to the QAR Lab as a research fellow, my experience with artifacts had been exclusively in a museum or repository setting. My knowledge of conservation was more in the context of maintenance where things already preserved, stored, or on display were temporarily pulled (for days or as much as a few months) for treatment in order to retain their condition. However, the QAR Lab focuses upon preparatory, investigative, and stabilization archeological conservation processes of objects recovered from site – before they are transferred to museums for display or storage. So, being at this lab was an illuminating experience that extended my understanding of the timetable for the development of museum exhibitions from historical archeological sites. 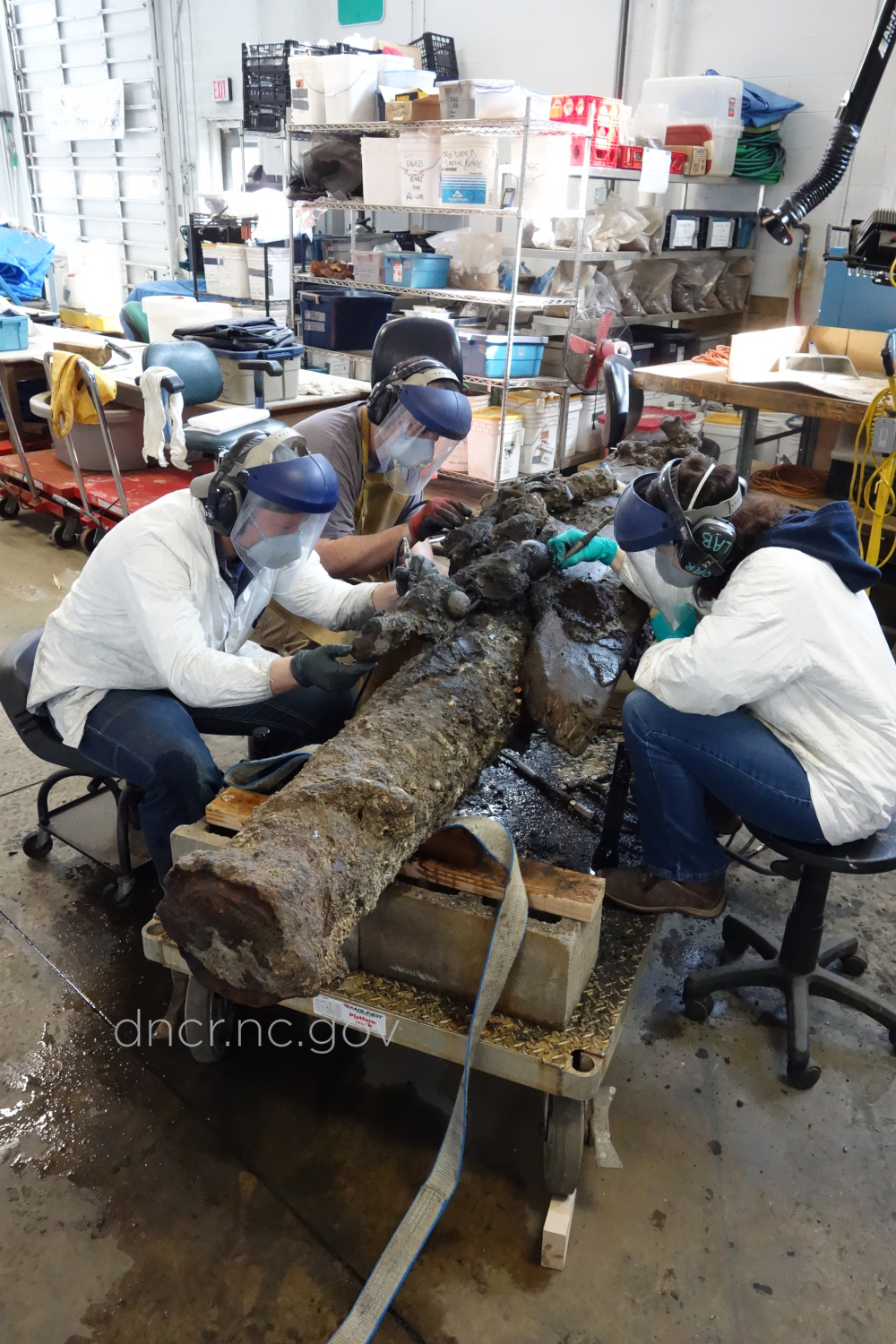 Working in the QAR lab, I learned that the site identified as the shipwreck of Blackbeard’s Queen Anne’s Revenge was discovered more than two decades ago in 1996. I had assumed that in this length of time the entire site would have been excavated. However, I learned that a number of factors can affect excavation progress, including staffing, equipment availability, the space and ability to store and treat items, and funding. From my now enlightened perspective, I have two takeaways. First, given the factors affecting excavation, it is remarkable that hundreds of thousands of items have been retrieved from the site. Secondly, while in other situations twenty-three years may seem like a sizable chunk of time, in terms of an underwater archeological site as large as the Queen Anne’s Revenge site, it is not.

The lab has recovered artifacts made of materials such as glass, metal, or even wood. All of the items from the wreck essentially have inhabited that same environment for over 300 years, first on board the ship and then later and longer on the ocean floor. I had assumed that objects from the shipwreck would end up in a museum rather soon after being retrieved from the ocean. Spending a few weeks with the QAR Lab team, I have learned that that was a completely naïve assumption. Not least because each object has different needs once removed from their three-century aquatic home; each therefore, requires a unique treatment plan to become museum-ready, which may take years or possibly even more than a decade. 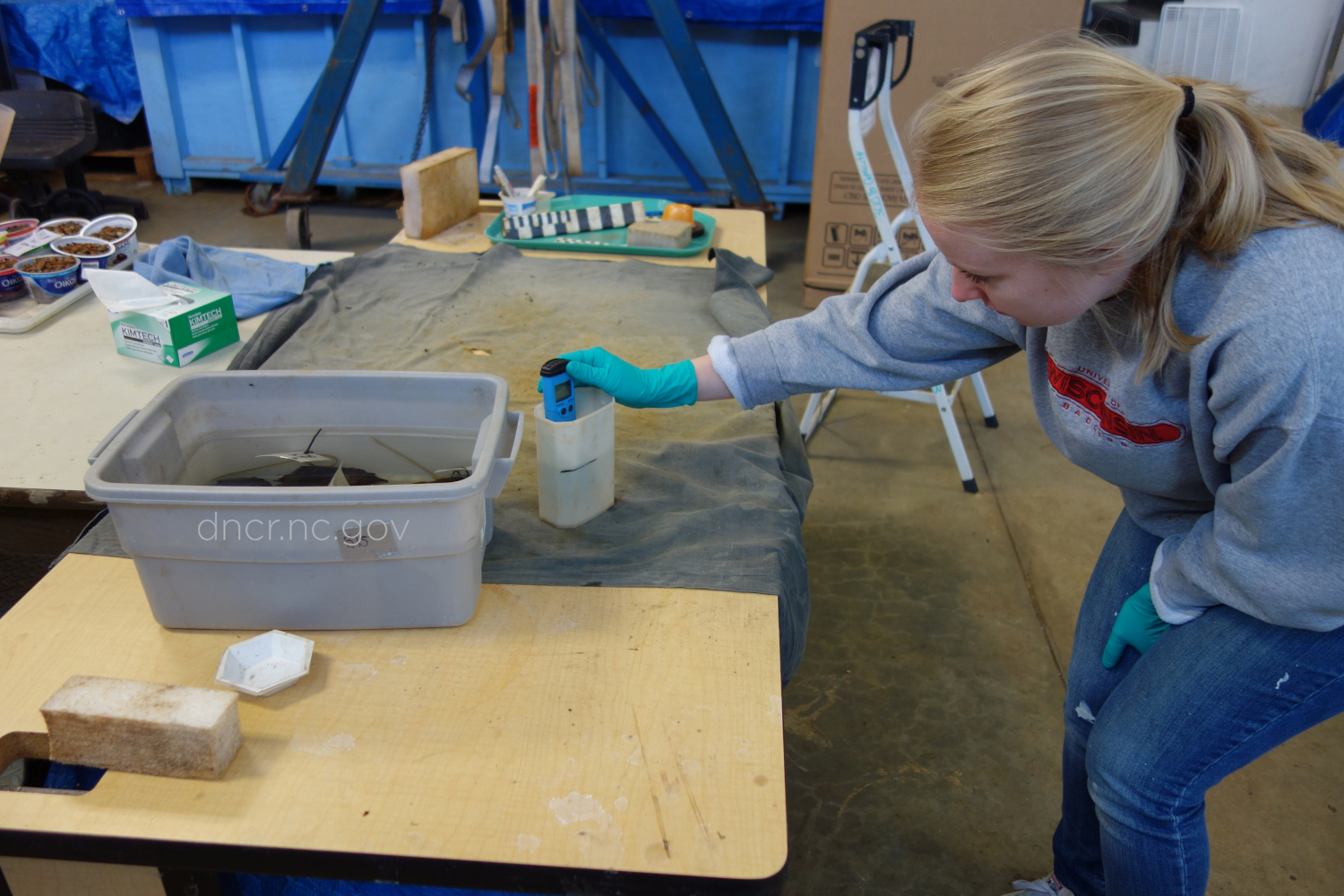 Perhaps, the most fascinating part of my fellowship was learning about the treatments and processes that objects endure. I witnessed or received explanations on processes including but not limited to desalination, cannon boring (clearing out of the inside of a cannon), and arresting corrosion (typically, stopping the degrading of objects made of iron). Of these three processes, desalination is the one with which I have become most acquainted with at the lab. Desalination is necessary since the objects from the shipwreck sat in saltwater for centuries absorbing salt. At the QAR Lab, desalination is done through diffusion, a natural but often lengthy process. The QAR team frequently monitors an object’s progress by measuring and recording soluble salt concentrations in the treatment solutions. After one such measuring, I assisted by recording the data into the QAR Artifact Database. This small activity helped me understand just how long desalination may take.

From this fellowship, I expected to learn more about Blackbeard and the history of Queen Anne’s Revenge. However, I did not expect some of the other lessons that I have learned during my time at QAR Lab. Through this I have come to realize that the practice of archeological conservation is both art and science. Also, I have become more familiar with underwater archeology, which is helping me develop a more interdisciplinary perspective. Quite possibly, the most important lesson I learned at the QAR Lab is that of patience, it takes time to recover objects and treat them. Being stationed at the QAR Lab for my fellowship has imparted me with a lot of wisdom.