Artifact of the Month: An Unidentified, Fascinating Object 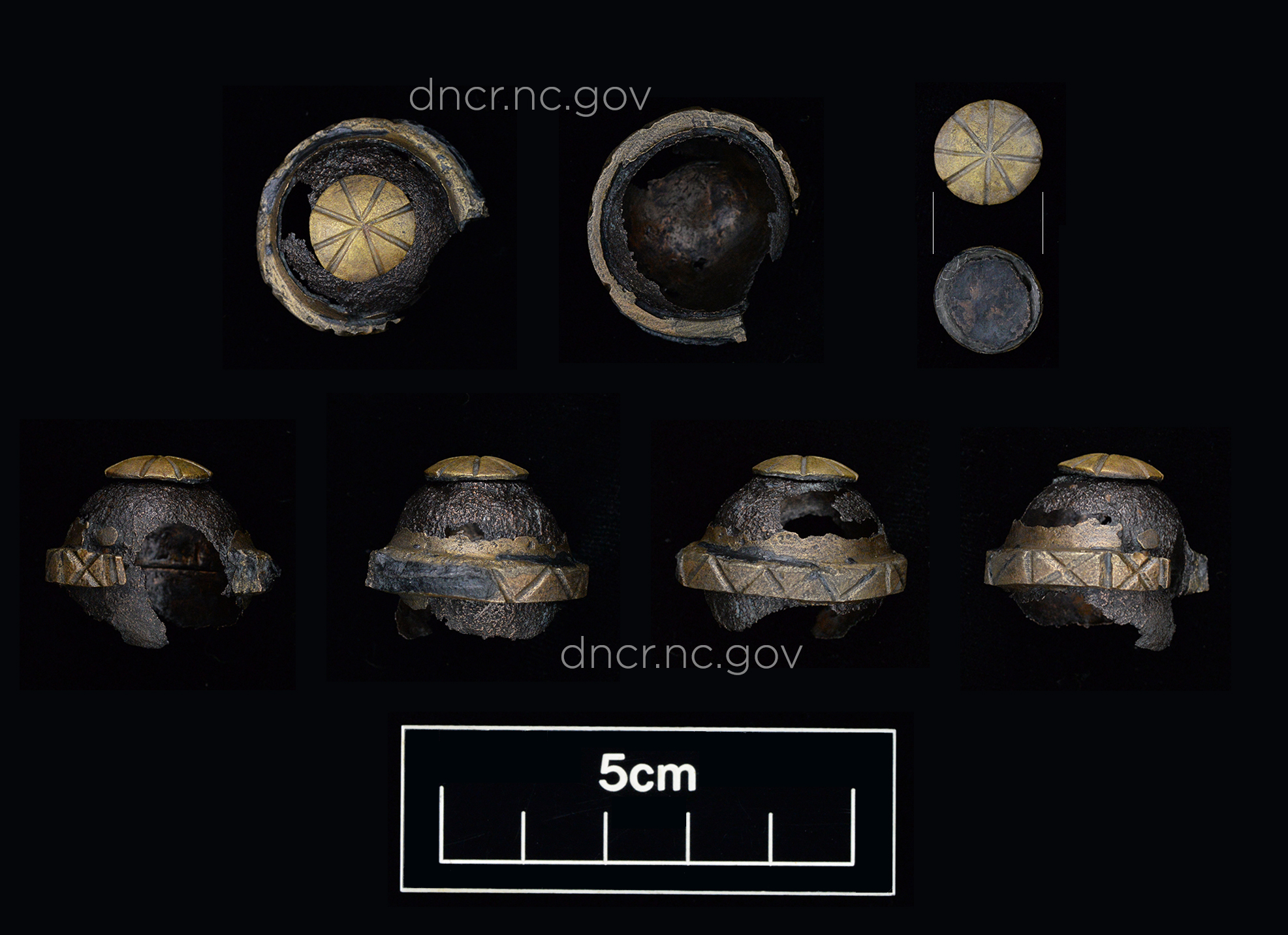 It may surprise you that despite all of our combined expertise and research connections worldwide, some artifacts have us stumped. In these cases, we proceed carefully to glean as much information about the objects as possible, so they can be identified in the future. QAR1108.010 is just such an object. It is made of copper and brass, and though not noticeable at first glance, there is a lack of uniformity throughout the artifact (for example, the caps are not perfect circles). 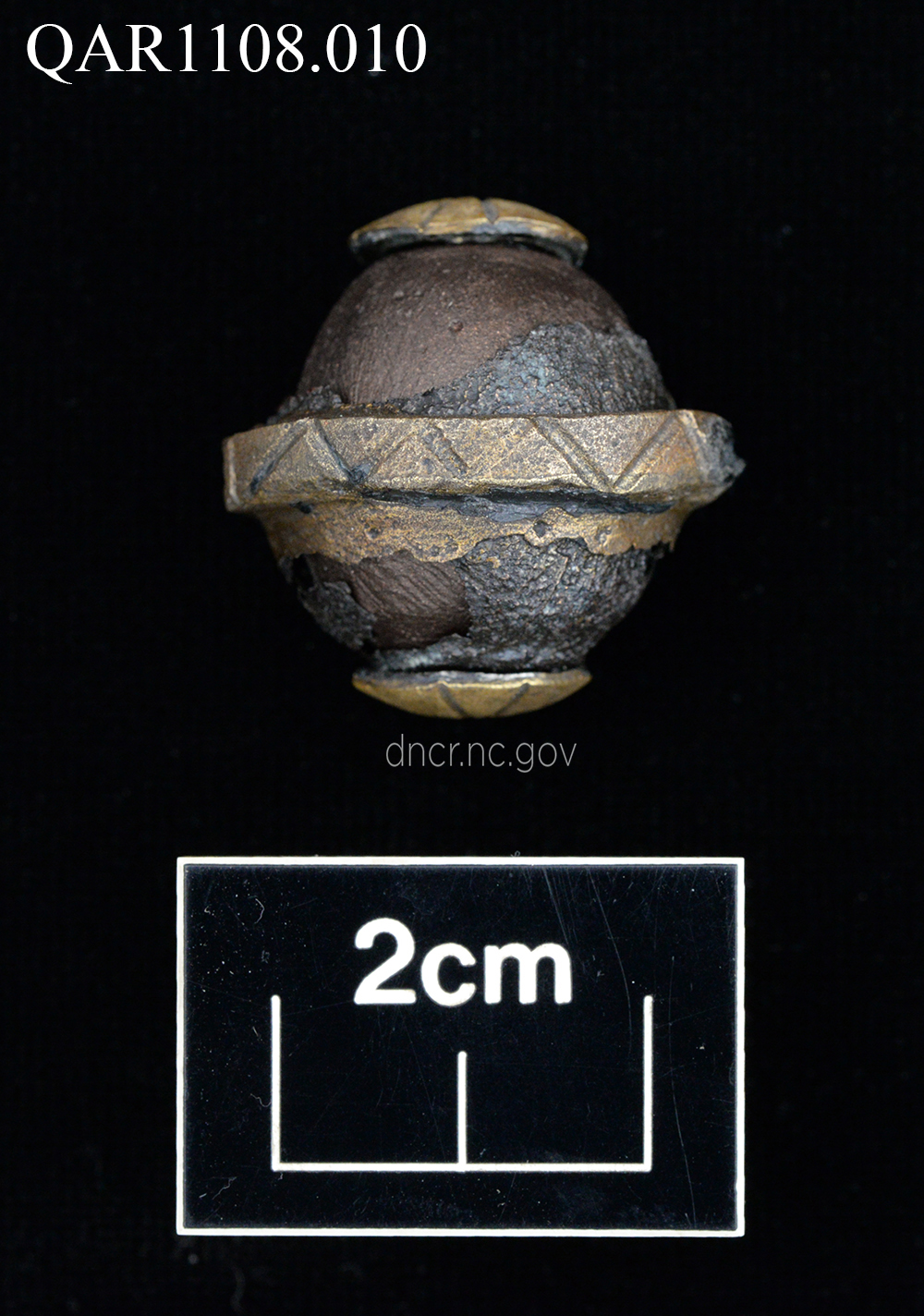 Notable features of this mystery object are the designs present on the band and the caps in the form of incised straight lines. On the band, these take the shape of X's, V's and I's. On the caps, the lines radiate outward from the center, appearing in a bicycle spoke pattern. There is also a hole in the globe. If there had once been an attachment point, it was most likely in this missing section; there are no other holes in the object that would allow it to be strung like a bead. White sand was found within the globe, but it could have been present at the time of manufacture or filled at the time of wrecking. Upon examination, it was found that the sphere was made by first making two hollow hemispheres and joining them together. This join is visible only on the inside of the sphere, since the band was soldered over it on the outside. The caps were also soldered onto the sphere. During conservation, an epoxy core was created to allow accurate display of one of the caps.

We know how it was manufactured, but the big question remains: What is it? 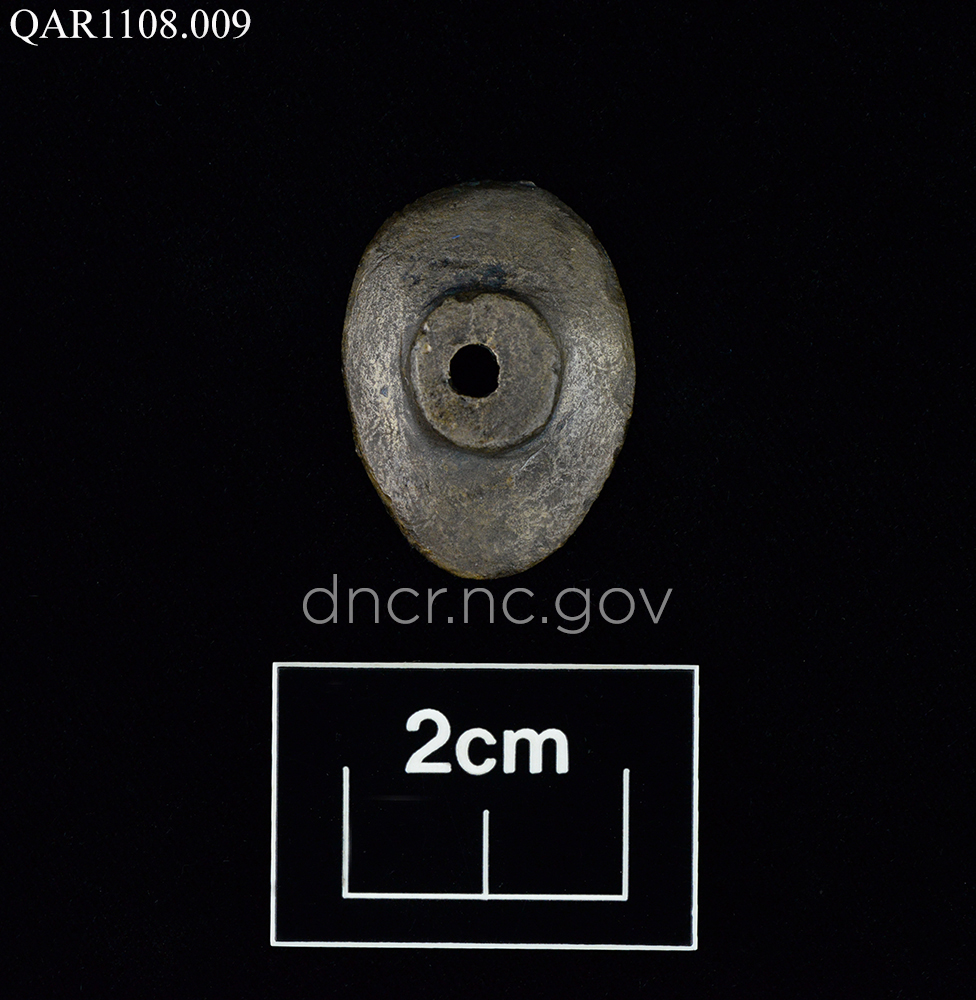 Sometimes the location of the artifact on the ship and the artifacts nearby can provide a clue. The artifacts from Unit 77, located in the stern, are quite diverse. A copper alloy object tentatively identified as a pommel cap was in the same concretion as the mystery artifact. Although the gap in the band fits around the raised area of QAR1108.009, it is unlikely the two artifacts are associated. With only one hole, there is no way for the tang of a sword to pass through the globe in order to secure a pommel. There would be no way to attach the two objects except by solder, but there are no traces of solder on QAR1108.009. In addition, even if filled with sand, the copper sphere is extremely fragile; and there is no indication that the hole present today was purposely made 300 years ago. The existing hole may just be damage related to corrosion.

In addition to context, we can also trace the ship’s journey and occupants between France, West Africa, the Caribbean, and the east coast of colonial America, studying art and archaeological sites from those areas for similar objects. Unfortunately, hollow metal spherical objects in the form of charms and beads are common throughout the world, and nothing discovered so far has quite matched the style of QAR1108.010. One possibility is that it came from a collection of charms known as balanganda, produced and traded in Brazil in the 17th and 18th centuries, and usually made with silver or copper. Hollow metal beads and pendants were also manufactured throughout the western coast of Africa at the time. These beads are traditionally made of silver in the north, and gold in the south, though cheaper materials could be used by poorer families.

Although the identity of QAR1108.010 has not yet been determined, careful conservation and analysis has uncovered many hidden details of the artifact and has allowed for it to be safely displayed to the public. With further research and collaboration with colleagues around the world, we hope to one day discover the identity of this unique artifact.