Artifact of the Month: Lock, Stock, and Barrel

Thoughts of piracy evoke visions of vessels and men armed to the teeth. Until recently, weapons from QAR were primarily represented by large artillery. The only trace of small firearms has consisted of a few flintlock mechanisms and copper alloy fittings, such as side plates, trigger guards, and a lone musketoon barrel. It is possible that these parts, having been left behind, were extras or non-functional. Usable firearms would have been easily offloaded following the ship’s grounding.

During a wrecking event and the ensuing years of degradation, delicate objects are subject to tremendous physical stress. If personal arms were left aboard, they would have succumbed to such damage; thus, it is not surprising to find isolated gun parts. Since Beaufort Inlet is such a dynamic environment, even intact firearms which may have been abandoned would have certainly broken up over the years and dispersed across the wreck site.

However, recent work in the lab has revealed an unexpected collection of five semi-articulated personal arms previously unknown from the site, including four partial muskets and one pistol. The first musket was discovered while x-raying concretion QAR3111.000. Now that it has been fully cleaned, a few details of this musket are clear. Early guns relied on a spark caused by the strike of a flint to fire the gun. The flintlock, or firing mechanism, is mostly intact, and the lock plate has the remnants of either a design, a maker’s mark, or a cipher. The stock and the barrel are both incomplete. The gun would have originally been about 5 feet long! 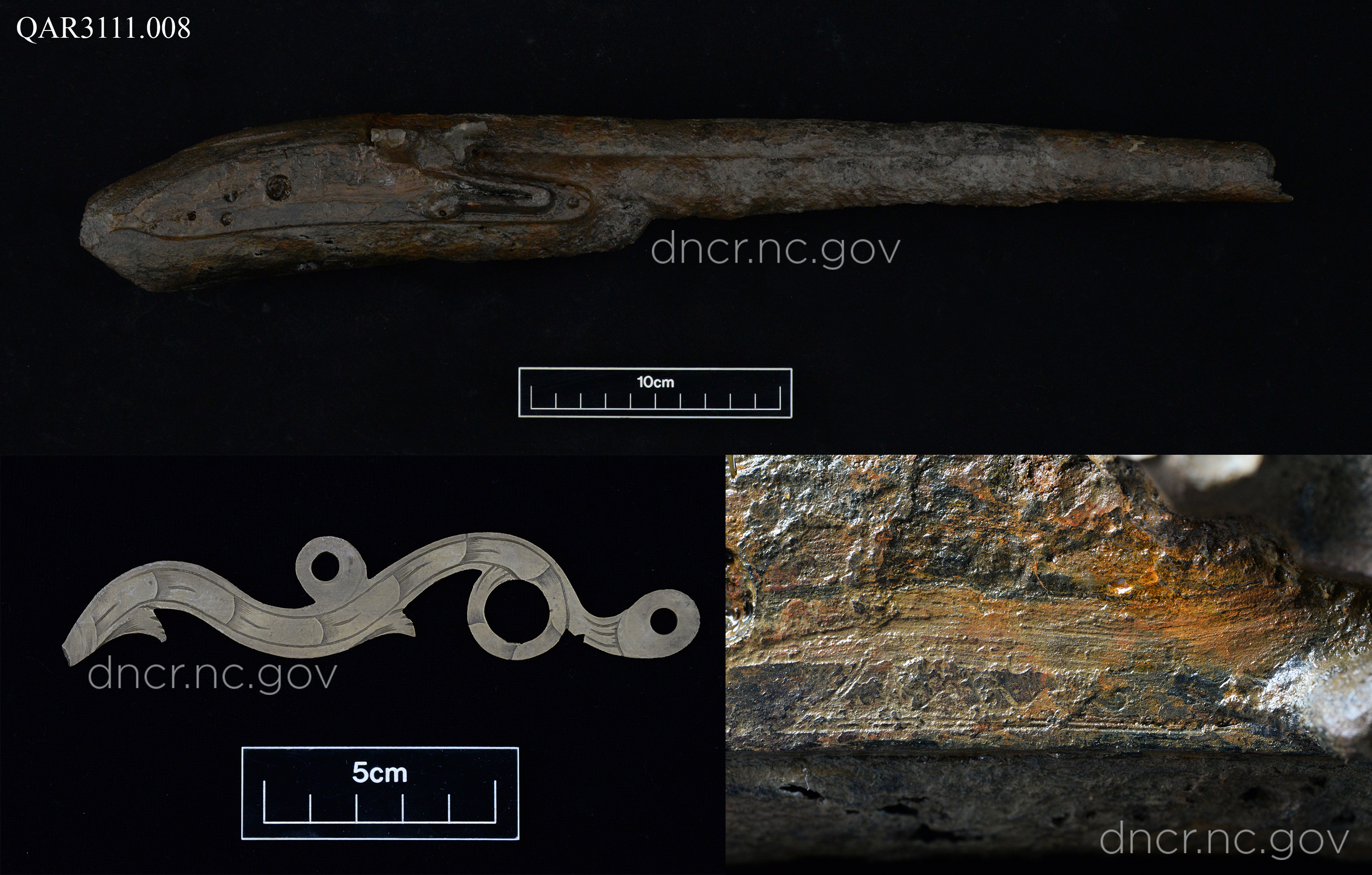 There are two pinholes in the lock plate just behind where the cock should be. The presence of a second pinhole tells us that this flintlock was originally manufactured as a doglock, or a gun with a safety. When half-cocked, a catch called a dog received the notched cock, making sure the cock would not accidentally fall forward and cause the gun to fire. Doglocks appear beginning around 1685 and disappear in military weapons by 1715. These doglock muskets were considered a nuisance, and the guns were routinely modified to remove the safety. It is impossible to determine whether this gun was modified, since both the cock and the dog are missing. The fancy brass side plate suggests that this musket was not military-issue and was manufactured as a commercial piece. Perhaps evidence of goods stolen by the pirates!