Artifact of the Month: Heaving the Lead

“That the next morning after they had all got safe into Topsail-Inlet, except Thatch, the said Thatch’s ship Queen Anne’s Revenge run a-ground off of the bar of Topsail-Inlet….”

And so our story begins. Imagine Thatch’s crew using sounding weights on their entry into the inlet -- perhaps our story would be a lot different or even non-existent. 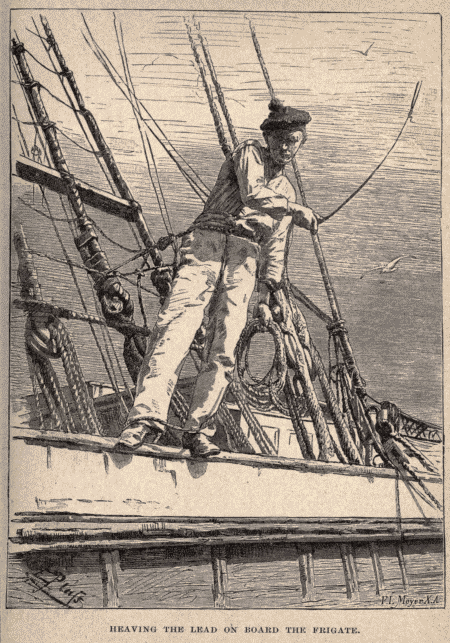 Sounding weights were a crucial piece of navigational equipment for safe sailing in the days before echo sounders and sonar. They were used to determine the depth of water under a ship and the nature of the sea bed. Virtually unchanged in form, they have been used for thousands of years. Their use has been described by writers from ancient Greece and Rome as well as by those in the 19th and 20th centuries. The sounding lead was attached to a very long line, which was marked off in fathom lengths (one fathom was six feet). The leadsman would stand outboard, usually midships. He would be tied or chained to the ship so that he did not fall into the sea as he swung the lead around and threw it forward so that it was parallel to the ships’ course. The lead would sink and as the ship passed forward, directly over the lead, the water depth was taken from the fathom markers along the line’s length.

Sounding weights often had an indentation in their base. This would be filled with something soft and sticky – such as tallow or wax. When the lead hit the sea bed, a sample of the bottom sediments would stick to it and be recovered with the lead when hauled back on board. Knowing the nature of the seabed could help with navigation through following known local geology.

Several of the QAR sounding leads have an indent at the base end, for example QAR004.001. This sounding lead weighs 21 pounds. The marks for this weight in Roman numerals (XXI) are scratched on the side. This sounding lead was found with remnants of its rope still in the hole at the narrow end. The rope was removed to conserve it separately from the lead – as different materials need different treatments.

The use of sounding weights would most likely have precluded the wrecking event; unless of course …. this was a planned wrecking event and an 18th century example of corporate down-sizing.