Artifact of the Month: Rupert Shot 220,958 and Counting 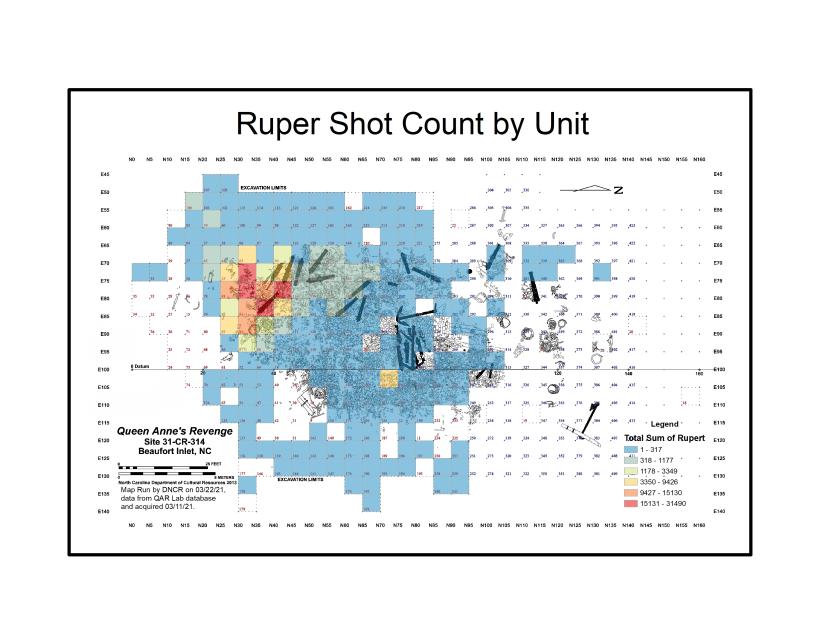 By far the most numerous artifact type recovered from the QAR wreck site is lead shot. We find both molded shot and a variety known as Rupert shot. Named for Prince Rupert of the Rhine, Rupert shot is ubiquitous in concretions, from one or two, to hundreds. Additionally, over 50,000 shot were recovered from the dredge spoil of only two units. According to its distribution, it is quite possible we have located the ship’s ammunition locker, indicated by the bright red squares on the map where shot is heavily concentrated.

Our Rupert shot averages 3.34 mm and weighs about 0.2224 grams. How were these tiny bullets made? Before 1665, sheet lead was cut into cubes and tumbled to smooth and round the edges. Enter Prince Rupert. A man of science and invention, he was a signatory and Fellow of the Royal Society, which was founded in the 1660s and is still active today. Most of Prince Rupert’s contributions were military in nature, including a new, improved method of making shot. From Micrographia by R. Hooke (1667):

“To make small shot of different sizes; Communicated by his Highness P.R. Take Lead…what quantity you please, melt it down, stir and clear it with an iron Ladle…strew upon it Auripigmentum powdered according to the quantity of Lead…”

With the addition of auripigmentum, a form of arsenic, he was able to make this small shot by pouring molten lead through a sieve into water from a height of four inches. Rupert shot would be made this way for over a hundred years. The next iteration of shot manufacture would be the use of shot towers, where lead was poured through a copper sieve from a greater height. This method was used until the 20th century when the Bleimeister technique came into use in the 1960s and gained prominence.

Shot is still used today as ammunition, and similar pellets are used as ballast, weights on fly fishing equipment, and in cooling systems. As you are no doubt aware, lead can be very toxic and there is much concern for workers and shooters on firing ranges being exposed to airborne lead dust or fumes. Additionally, there is concern for the effect lead ammunition is having on waterfowl and scavengers. There are several Federal and state laws in effect limiting lead ammunition use, and the use of non-toxic alternatives such as bismuth and tungsten are encouraged.

Lead pellets resembling Rupert shot are even used in some diving weights, but these are banned on the Queen Anne’s Revenge wreck. Imagine if one of our divers tore their weight – all those little pellets would contaminate the site and skew our interpretation!