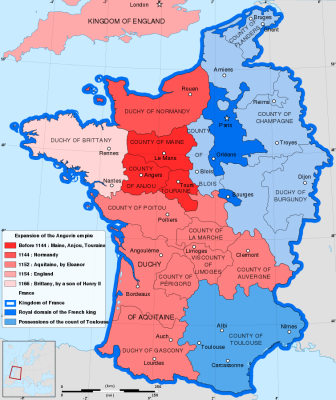 In 1300, Jeanne de Belleville was born in Brittany to noble parents. Over time, she would marry well and have children. What would cause someone with this background to leave the life of luxury to become the Lioness of Brittany? In a word: revenge.

At that time, Brittany was a self-governing entity in what is now western France. It would become one of the contested lands fought over during the One Hundred Years War, a series of conflicts between England and France that ran intermittently from 1337 to 1453.

Jeanne de Belleville first married at the tender age of 12, young even by 14th century standards. That marriage lasted until her husband’s early death in 1326. A second marriage was annulled and then she married the love of her life, Olivier de Clisson, in 1330. The couple would go on to have five children. But it was a turbulent time, and it was not in their favor. The Duke of Brittany died without an heir, and France and England backed opposing sides in the succession war. Clisson supported the French, but through a series of events, the French Crown came to believe he had betrayed France. Unaware of this, Clisson accepted an invitation, along with 14 other minor lords, for a tournament in Paris to celebrate the current truce between the warring parties. It was all a lie. Once there, he was tried, convicted on no evidence but a coerced confession, and beheaded along with his comrades. To add insult to injury, his head was put on a spike in Nantes as a warning against treachery. (Does this city ring any bells? Yes, of course you are right, it is the one-time home of La Concorde/Queen Anne’s Revenge – though that story is almost 400 years in the future).

Jeanne de Clisson reportedly took her two sons to Nantes to see the head on display. Harnessing the ensuing rage, the Lioness of Brittany rallied support. She sold “her land, her jewels, her pompous attire, the rich and precious furniture that decorate her castles” and bought three black ships, painting the sails red. She terrorized the English Channel, primarily preying on the French. The Lioness of Brittany developed a reputation for vengeance reportedly granting no quarter, plundering and then sinking ships.

At some point in this reign of terror, the Lioness allied with the English both privateering on their behalf and supplying their forces in Brittany. English documents list her as an ally in the 1367 truce and others name her as a traitor to France. It is estimated Jeanne stayed in this piratical life for 13 years – coincidentally, one year for each year of her marriage to Olivier. In 1356 she returned to a more traditional way of life and married for the last time. Unlike most of her pirate kin, she died a peaceful death.

Well, maybe peaceful. Some say she haunts Clisson castle to this day…